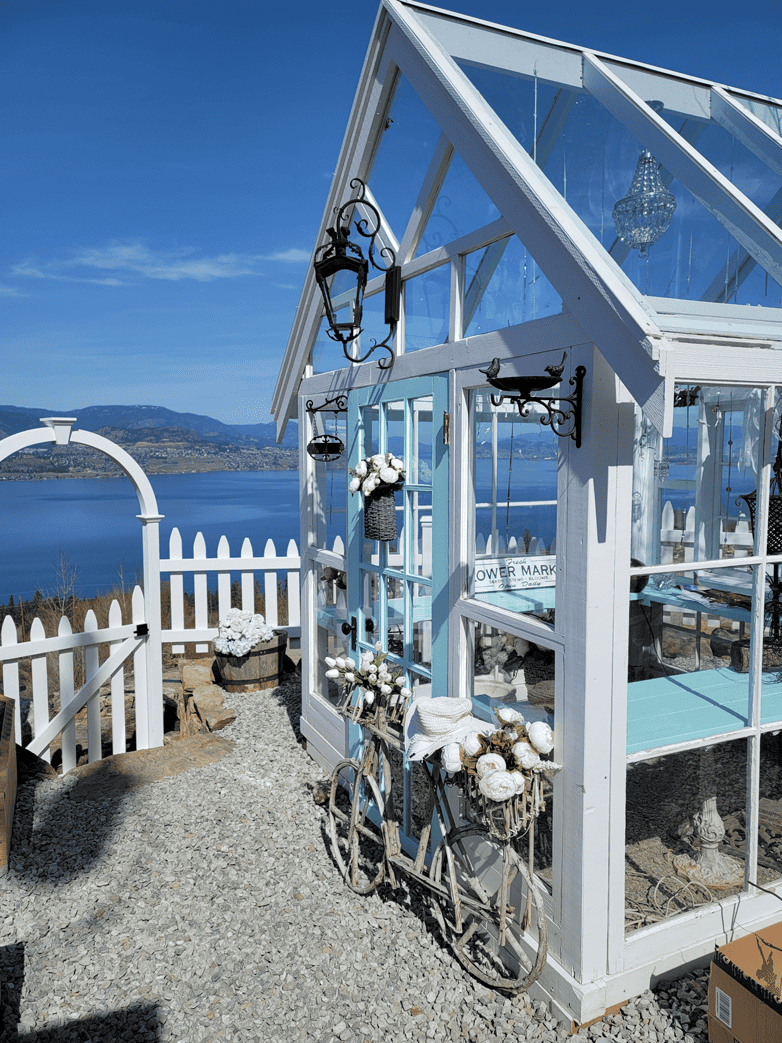 Below you will find, a couple of words about us

Hello – I am Crystal and the mom, designer, writer and dreamer of the family.  Other members of my family/team are my builder husband, Bentley; my architect daughter, Jenna; and my genius tech son, Noah.  I cannot forget our sweet little pup, Mia and of course all of the deer, marmot, song birds and chipmunk that inhabit Sweet Valley Acres.

We are here to share our experience building on a challenging acreage overlooking Okanagan Lake in Kelowna, BC. Canada.  If you like shows like “Highway through Hell” and “Extreme Homes”, you are going to love our story.  We have had moments of joy, heartache, complete exhaustion and frustration but in the end we couldn’t imagine building our forever home anywhere else as this property truly feeds our souls.

I will also be sharing how we are landscaping this property, my beautiful flower garden, the sweetest vintage greenhouse, the upcoming build of a pool and of course everything that encompasses home and garden décor.  I also look forward to showing you the picturesque area we live in which is know for orchards, vineyards, lakes, waterfalls, mountains and beaches.  We are truly blessed to call the Okanagan our home.

So first lets meet the team. I will go first because you will be hearing from me the most. This is my blog, but I like to acknowledge all players involved because they are so important. I truly would not be here today if it were not for them.

I grew up on a hobby farm just outside of Vancouver, British Columbia. My mom and dad’s favorite pastime was landscaping their acreage. Dad brought in all sorts of trees and so many rocks and mom planted lots of plants to soften the rocks. At first, people nicknamed my parents property “Stonehedge” because it was bordered on two sides by large rocks that my dad brought in from quarries. You could say, I got my love of gardening and transforming things from my parents. They took a barren piece of land and brought it to life with a wide assortment of trees, lots of flowers and large ponds and streams that ran through the property.

Eventually, I met Bentley. He grew up on the same street as me but 4 miles north. We went to highschool together but while Bentley was taking mechanical, drafting and shop classes and spending his free time working on cars, I was taking literature, calculus and economics and in my free time I was dancing. Our paths did not cross in highschool at all. In fact, we were voted the most unlikely couple when we returned for your 10 year grad reunion!!! The story of our relationship is a sub-story in the blog about Annie, our greenhouse. If you are interested, click here.

We dated for four years and then got married. We moved around a lot due to work. We always wanted to own homes because I wanted a yard. With little money, we picked the worst house on the best street we could afford and the renovation process took place. I was always scheming and dreaming and Bentley was dutifully bringing my dreams to life.

The thought of starting a family was the catalyst for our move to the Okanagan. We wanted to raise a family away from the hustle and bustle of a big city and in a four season playground such as Kelowna. Hot, hot summers and perfect snow in the winters was what it was known for. While on a holiday in Kelowna, we purchased a home and much to the surprise of our families we moved within a month. Soon afterward we were blessed with a lovely little girl who we named Jenna Kate. Not too long after, we were blessed with a most joyful son who we named Noah. They have since grown into young adults. Jenna is an intern architect and Noah is our computer and tech genius!

Here are some fun facts about me:

I love animals, I cannot take them getting hurt or looking hungry

I graduated as valedictorian of my grad class

I traveled internationally as a professional dancer

At age of 19 years old, I shopped in the black market of Seoul, Korea all by myself

Bentley and I used to own a home and garden decor shop that was called “Eden”. We entered many exhibit competitions at garden shows and won lots of awards

I am allergic to seafood and bee stings

I have the autoimmune disease “Hashimotos”

I am a Christian but not religious. Walking in love is the main goal of my life

Warm summer nights, the scent of honeysuckle and the sound of crickets are some of my favorite things

Bentley grew up in a strong Christian family with three sisters and two brothers. It was an insult to his mother, Annie if anyone said she was religious. She is the one who taught me that the most important thing to do is to love everyone and treat them with compassion. Bentley’s father, Pete was a builder, a baseball player and was extremely generous. Pete and Annie had a large acreage that they built cabins and buildings on for use by the church to have summer camps for kids. Eventually they gave the whole acreage away.

Bentley grew playing hockey and baseball and working on cars. He was always a hard worker helping around his parent’s farm. He started framing at an early age and eventually became a builder too.

His ear drum burst at a young age from an undetected infection which caused him some hearing loss. The rest of the hearing loss is from working around loud machinery

He used to flip cars like people flips houses – he would buy an old car, fix it up and sell it. He did very well with this

His parents had old beater cars for the kids to learn how to drive in. Bentley used to love rolling them in the fields of their farm

He has the most dreamy blue eyes I have ever seen

He loves boating and waterskiing

He doesn’t like overly sweet foods or drinks, sauerkraut or beets

He is very meticulous and definitely a perfectionist

His dream car is a Koenigsegg Regera

Jenna was born three weeks prematurely and came into this world as a teeny, tiny 5 lb 12 ounce little girl. We learned fairly quickly that she was lactose intolerant but once that was figured out she was a happy baby. At the ripe old age of 3 years old, she advised me that she was moving out and was going to go live with the babysitter. I thought wow if she is like this at 3 what is she going to be like at 16? Well, I am happy to report it was smooth sailing after that blip. As much as I tried to get Jenna to follow in my footsteps in gymnastics and dance, she did not enjoy it. She found volleyball in grade 6 and went all in after that. She became an accomplished court player and a pro beach volleyball player. She has a degree in Environmental Design from UBC and a Masters Degree in Architecture. She presently works as an intern architect at a Kelowna firm that does architecture, engineering and urban planning.

While at university she was chosen as one of 10 students from around the world to do an architecture camp at Fallingwater – she actually got to live there for a week!

She has traveled to France, Ireland, Spain, Italy, Greece, the Bahamas, Mexico and the US

Her thesis was about transforming alleys into more useable spaces

She loves dressing up and socializing with her friends

Her pride and joy is her Jeep

She is not great at keeping plants alive

She loves photography and fashion

Her favorite store is Fracas

She loves corny jokes and Hallmark movies, especially Christmas ones

Noah was born on July 1st, Canada Day! He was smiling from the minute he was born. He loved laughing and he would eat anything. We would give him a pickle, and he would shudder with each bite but he kept on eating. His beautiful golden locks and pale green eyes caught the attention of acting agents but at that time, he preferred to attend science camps. He is super creative and loves animals. He didn’t enjoy team sports but loves to swim, skateboard & longboard, drive his sports car, watch movies, play VR and other computer games. He received the Entrance Scholarship to Computer Systems Technology at BCIT. After a year in that program he switched to Web Development. He also has a secret invention in the works. He is by far the wisest person I know and I often look to him for advice.

After he was born, the nurse took a long time bringing him back – when she did she advised it was because he had so much hair she didn’t know how to style it

He has the thickest eyelashes I have ever seen

His bedroom is like walking into a tech store – so much equipment!

His favorite artist is Rob Gonsalves

Last but not least, is our sweet pup Mia. We got Mia when she was 9 months old. She suffered from severe separation anxiety. We tried everything to make her feel better but the only thing that worked was the pandemic because we were home all the time! She is a great police dog as no one is allowed to speed (run) in our house, the ultimate vacuum as no spec of food on the floor is missed and she is always on the look out for intruders (chipmunk, marmot, deer, bear or coyotes).

She is a Yorkie, Shih Tzu, Pomerian cross

She is 5 years old

She has way too many beds

She loves being out at the greenhouse with me

She knows not to bark when the coyotes start howling

So now that you have met the team buckle up because while much of our story is beautiful there have also been some fairly significant bumps along the road!

Here you will learn about me and the beautiful support team of my husband, daughter, son and little doggy who keep me inspired!